As those of you who follow our Twitter (www.twitter.com/fpvuk) will already know, FPV UK strongly condemns the BBC’s programme ‘Britain’s next Air Disaster? Drones’ which aired on BBC Two at 9.30pm on 1st July. The programme has also been repeated several times, will be repeated several more times over the next month and is available on iPlayer here: https://www.bbc.co.uk/iplayer/episode/m0006h51/britains-next-air-disaster-drones

The show purported to be about the risk of an air disaster involving a drone, yet it focused entirely on the severity without any mention of the likelihood. (Which is very low).

The impact tests used a completely unrepresentative wing from an old GA aircraft (which would never have flown at 250kts in its life). They first fired a gelatin bag at the wing, apparently to represent a bird (a bird with no bones or muscle apparently). Then, with the wing already weakened, they took a drone and smashed it to bits (removing all of it’s frangibility), added black rods (which would have concentrated the force in a small area on the wing perforating it and preventing the projectile from deflecting off the wing), added a metal block and fired it at the wing.

For comparison a current A380 airliner wing is shown below with a man standing on it. Clearly, given that the airliner wing is several times the size of the entire test lab in the programme, the damage shown would have been nowhere near the control surfaces. And, had a real drone been fired at an actual airliner wing, it seems very likely that it would do no damage at all. 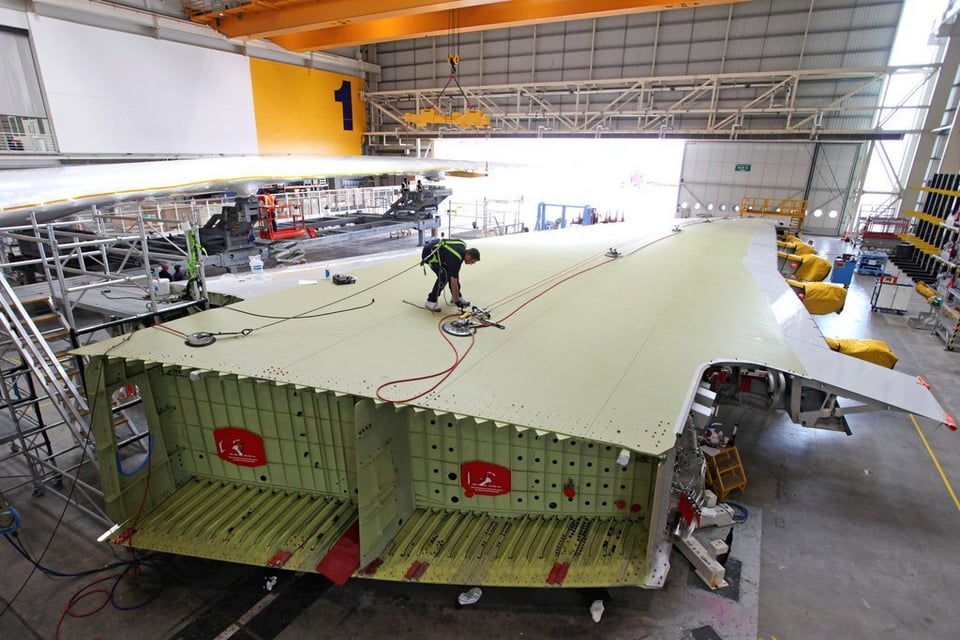 The drone used in the test was an older model DJI Phantom which weighs approximately 1.3kg. This is no longer representative of the fleet. The most popular drones are the DJI Mavic 2 which weighs 905g (31% less mass), DJI Mavic Air which weighs 430g (67% less mass) and DJI Spark which weighs 300g (77% less mass). This reduced mass makes a huge difference to the kinetic energy involved in a collision. (For reference EASA, UK CAA, FAA and other aviation regulators consider upto 250g as ‘harmless’).

The failure to explain what an airprox report is (an unproven eyewitness account)(despite the producers being made aware of this fact and airproxrealitycheck.org) and the decision to exclude interviews given by representatives from DJI and the BMFA, which no doubt would have provided some balance, highlights the intentions of the producers to make a sensational programme with no regard for the truth.

Suggesting that racing drones could be flown from hundreds of miles away, loaded with munitions, is a complete misrepresentation of the facts. A racing drone cannot carry meaningful weight, has a battery life of between 3 and 6 minutes, has a radio range of a few hundred metres with direct line of sight (a lot less in an urban environment) and that’s not to mention the skill of the pilots. Drone racers spend months and months, and (safely) crash time and again to be able to do what they do.

The programme also failed to mention that the military uses technology to jam radio signals to prevent remotely triggered IEDs and prevent drones flying near to them.

Aldo Kane was subsequently interviewed on London Live and was more truthful: https://www.londonlive.co.uk/news/2019-07-03/aldo-kane-is This just shows that the BBC/ Windfall Films were aware of how flawed and untrue their programme is. Yet they still chose to air it and continue to repeat it and make it available on iPlayer.

We strongly encourage all of our members, and anyone with an interest in fair and unbiased reporting, to log an official complaint with the BBC here: http://www.bbc.co.uk/complaints/complain-online/